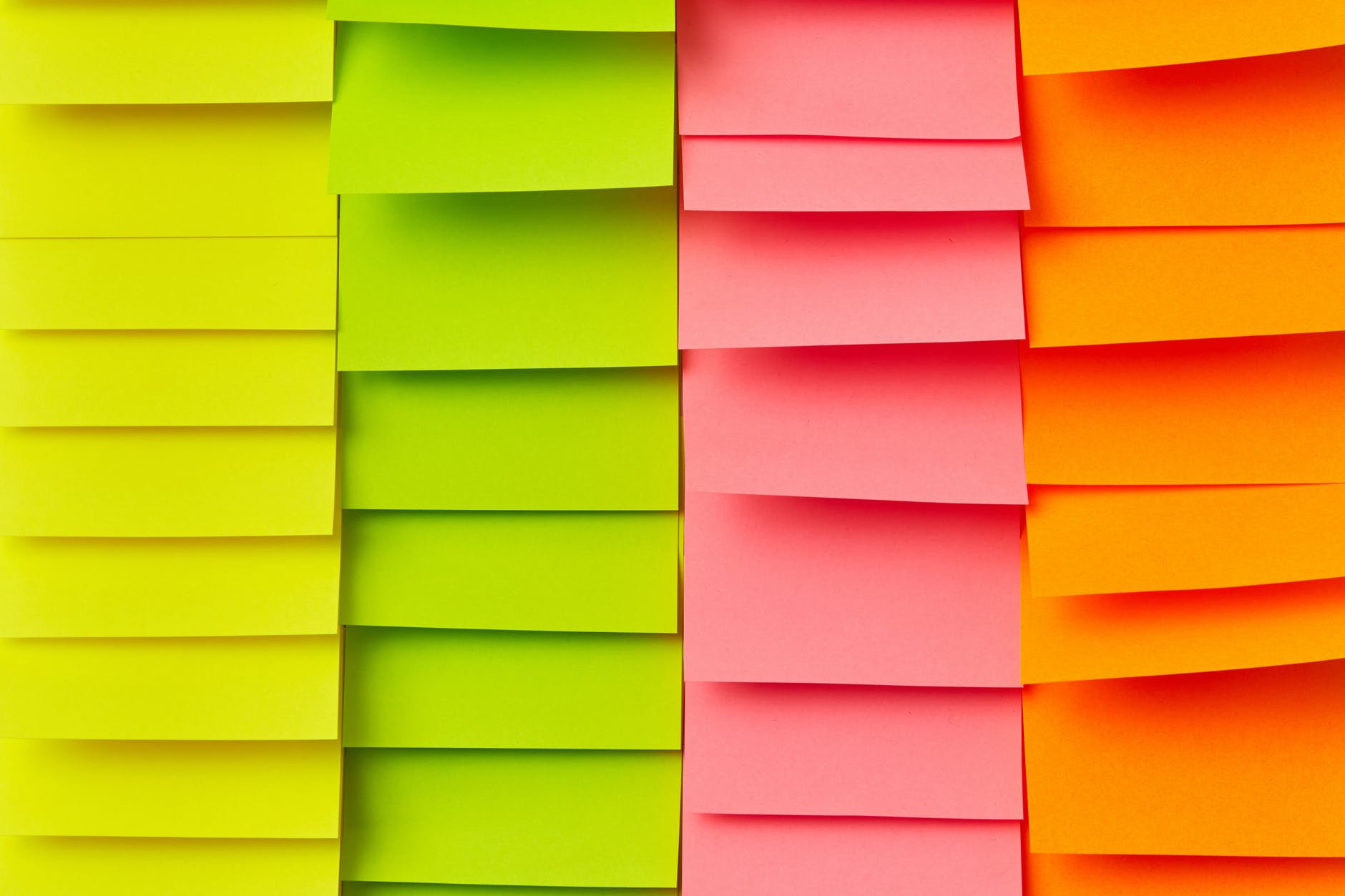 Photo by DS stories on <a href="https://www.pexels.com/photo/colorful-sticky-notes-in-close-up-photography-6991358/" rel="nofollow">Pexels.com</a>

In 2014, while travelling around the world, I did a "brain dump", taking the time to mentally declutter as I travelled around the globe. In 2021, I put an extended period of sick leave to use for the same purpose. What does the future have in store? Python, geocaching and a pain au chocolat...

I think you will spend 369 seconds reading this post

I was recently felled by acute hearing loss and tinnitus, coming at the end of a busy year. The doctors I went to really advised me to try to avoid noise as part of the recovery process. It meant that while off on sick leave I read a lot on my Kindle and avoided noise where possible (easier said than done with three lively children aged three to five). As part of the noise avoidance, I went to the supermarket in noise cancelling headphones, avoided public transport except for going to the doctors. I struggled most on the U-Bahn, particularly with the sound when a train comes out of a tunnel and goes into a station. Masked and with a hood up, I probably looked to all intents and purposes like I was definitely up to no good.

I also blocked off all sources of potential stress and anxiety, which meant cutting out the constant dripfeed from social media. I know a few people who have done similar when their mental health has been affected in recent years. Their sudden overnight absence was often the first indication that something was not right and to connect with them (I realised that you can only offer to be available to chat if they want to, but if they don’t want to, you shouldn’t take it personally – I always say to contact me in their own time if/when they feel ready to – some have surfaced in a number of days, in another case it took nearly 18 months).

I logged myself out of Facebook for days on end, Twitter and LinkedIn. I didn’t bother with doing the same for Instagram as I’d really fallen out of love with it in the first place. In addition, once I logged back in, I installed an app blocker, which prevents me from accessing social media between 22:30 and 07:00 (although the children usually wake before then) and again from 09:00 to 17:30 on weekdays, and also restricts the amount of time you can spend in specific apps. The timings were also important in relation to trying to re-establish a normal sleeping rhythm and to ensure regenerative sleep. I also used the downtime of sickleave to rediscover guilt-free snoozing – falling asleep reading a book in bed and having absolutely no feelings of guilt whatsoever about doing so.

I set up “out of office” mails on my work mail address and the mailbox I have for britishinaustria.net. I kept Facebook messenger accessible to be able to reach a few people I needed to, particularly as the fruits of my mental decluttering process below became apparent. I then also went through all my apps and notifications. I have my phone on silent usually anyway, but my phone notifies me about pretty much everything. The disturbing nature of notifications was also highlighted by an article in The Guardian this week. Whereas GDPR now means a lot of “opt in” rather than “opt out”, the opposite is true for notifications – you physically have to disable them rather than choosing to receive them. When you have a sea of notifications from various apps, it is impossible to keep up with them as they fight among themselves for your attention.

So why did I actively log out of social media, when I could have just turned off the notifications? Part of the issue is the way that the apps also suck you in. Facebook suggests what you might also be interested in, meaning that if you like say a group about trains (yes, I do!) it starts suggesting all manner of groups about trains. If you like a group with a generic name like “British in [Country Name]” or follow a government website, there are mushrooming suggestions of other “British in [Country Name]” groups that you might be interested in. And try as I might, I have struggled in the Facebook app, which seems to have a mind of its own, to disable its suggestions.

Back in 2014, when I changed jobs, I had six weeks travelling around the world during my notice period from my previous employer. My BlackBerry became my notepad and I wrote notes about anything and everything that I needed to mentally “dump” out of my head. There were lists of to dos (for tying up the loose ends of my old position), names (of people I needed to contact about various matters, as well as people I wanted to put in contact with others) when I returned to the office to finish off in my old position, and project ideas that I had that I wanted to get down on screen/paper ahead of my “fresh start” in my new job.

Seven years later, I am still working in that “now not so new job”. This time around there is no “new job” awaiting, but there are names and to dos and random thoughts that need to be put into a more manageable form and banished from my mind, as well as thoughts about how to tackle work with a clearer mind and thinking about the challenges of “Digital Transformation” – and finally taking the time to read my copy of Translation Quality in the Age of Digital Transformation. This time, rather than reaching straight for a smartphone, I decided to begin the process on paper. And so I cracked open four packs of Post-it notes – in different colours and sizes and started writing in a stream of consciousness.

Freed of the technological “smog” of notifications and social media, I duly started writing notes on Post-its. At first they were a jumbled mess placed next to each other. After every ten or so notes, I then took a step back and looked at which ones were related to one another (for example wherever there was a discernible to do on the Post-it) and duly created stacks of Post-its that were linked to one another. Only after eight days, with my hearing loss having improved somewhat, did I sit down with my computer and start consolidating the courses of action. At that point, I had also started to work out which to do needed to be done first, and which to dos were consequences of others. Don’t worry, there is no impending descent into a Gantt chart and allocation of milestones.

However, as I firmly believe in not everything being “all work and no play” there was one little stack, which was my “reward stack” and on this pile of Post-its I wrote a list of potential treats and rewards, as well as a list of thinks I want to learn – I remain exceptionally curious about learning new skills and CPD. The treats and rewards could be something small (e.g. a coffee and a pain au chocolat; finding a Geocache). With the geocaching rewards, I then went through a list of Challenge caches that I have ear-marked to complete – one for example requires me to find mystery caches on a fixed day in every month in the year. One example of a new skill to learn was that I want to learn Python, and there is a tailored course on “Python for Translation and Localization“, that I intend to complete.

The only downside, is that I wish I had made the time to start the process earlier, and not only once the emergency brake had been pulled.